Transcontinental cooperation between Berlin and L.A.

The Berliner Energieagentur (BEA) and the Public Utility of Los Angeles in California have started a cooperation in the field of decentralized power generation. Both companies want to install so-called Micro Grids as stand-alone grids in both cities, via which locally generated electricity from renewable energies can be distributed via an intelligent, smart control system. Both companies and cities want to exchange and learn from each other about their experiences with this component of energy system transformation.

The cooperation between the BEA and the Los Angeles Department of Water and Power (LADWP) dates back to an agreement signed in October 2017 as part of the 50th anniversary of the city partnership between Los Angeles and Berlin. The project developed as a result is funded by the Federal Ministry of Economics and Energy. During a visit to Los Angeles, BEA Managing Director Michael Geissler talked to LADWP executives David Wright and Nancy Sutley, as well as Professor J.R. DeShazo of the University of California Los Angeles and Maria Salinas, President of the L.A. Chamber of Commerce, about the cooperation. In the coming months there will be joint workshops on the two model projects.

BEA Managing Director Michael Geissler: "Especially in difficult political times, in which both climate protection itself and transatlantic cooperation are called into question by some, such cooperation at the local level is very useful.

Berlin and L.A. have numerous parallels in climate protection. Both cities have set themselves ambitious goals. Berlin wants to become climate neutral by 2050 and reduce greenhouse gas emissions by at least 85 percent compared to 1990. L.A. wants to guarantee 70 % of the energy supply by 2036 on the basis of renewable energies and no longer use fossil fuels for energy generation by 2045. 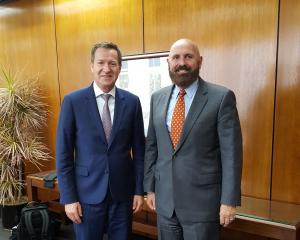